I suspect that it will be abundantly clear to you, my astute reader, that the production of a tube bundle rocket thrust chamber will require the fabrication of a foundation element with a multitude of holes equally spaced on a PCD.

Of course this means indexing. The usual way to achieve this is to use a rotary table with dividing plates. This time honoured method, whilst working extremely well, is also rather tedious and is prone to human error - especially when I am doing it!

Therefore I decided that it would be worthwhile spending a little time motorising my Vertex 6 inch rotary table to automate the indexing process.

After some internet research I discovered Gary Liming's excellent Step Index project. Gary writes for the US magazine "Digital Machinist". Gary also has a very good website with a build log for the project.

Step Index is an Arduino based system with the firmware currently at version 2.3. The system can work with fixtures with a variety of gear ratios. Initially it was designed for a 3:1 set up, but has since been re-written to cope with 40:1 and 90:1. Most rotary tables are 90:1, as is mine. The Arduino source code can be downloaded from the Digital Machinist site, as can a Read Me file explaining how to make modifications to the code to add more ratios or to make a specific value the default.

Gary gives a comprehensive explanation of the operation of his system on his site, so I will only briefly outline it here.

An Arduino Uno board is at the heart of the system. This is fitted with an LCD keypad shield. I got mine from Sain Smart, but there are many other sources for this part. The Arduino displays system modes and status via the LCD. A stepper driver board based on the Toshiba TB6960 IC is clocked by the Arduino, thereby driving the stepper motor. The motor I used is from Zapp Automation here in the UK, type SY57STH76. This is a NEMA 23 frame, 2A, 1.8 degree per step motor with a holding torque of 1.89Nm. I also obtained a 12V, 5A switch mode supply to run the lot.

The photograph below shows the system connected up for bench testing:- 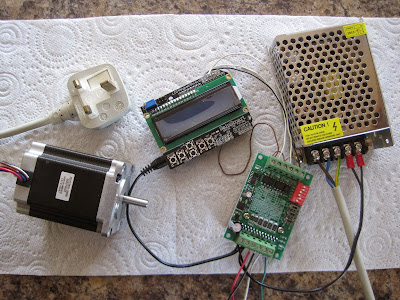 The buttons on the LCD shield are used to scroll through and select menu items. I will piggyback larger, more user friendly ones when I fit the system into a die cast case.

The menus are as follows:-

Ratio - Allows the user to select the ratio of the fixture being used. The software can be modified to include as many as are required, but 3:1, 40:1 and 90:1 are included as standard.

Temp - Facility to read motor and driver heatsink temperature, using two sensors connected to the Arduino's analogue inputs. I did not use this function.

Step - Enables user to specify a number of divisions. The motor is then incremented the correct number of steps for each division.

Angle - Similar to above except that the user inputs the angle the fixture is to be rotated through.

Run - The motor will run continuously with speed set by the user.

Jog - The motor can be nudged a preset number of steps.

The photographs below show the Arduino Uno board and LCD shield, the stepper drive board and the switch mode PSU. 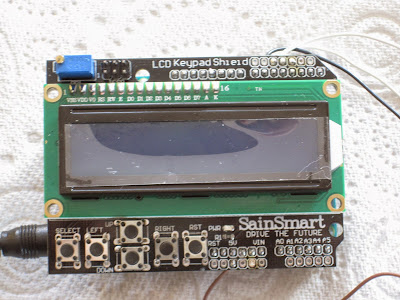 The momentary push buttons can be seen here, as can the multi-turn potentiometer used to set the screen contrast. 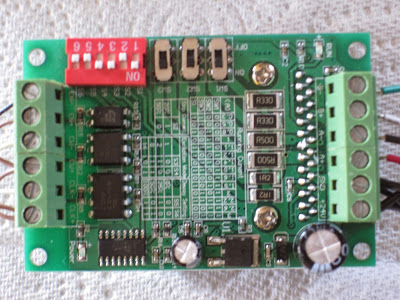 Stepper driver board. DIP switches allow the setting of current characteristics and microstepping settings. The power IC and heatsink are on the underside. 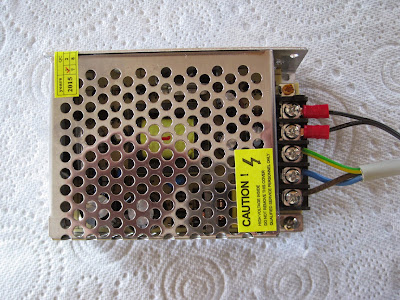 The switch mode PSU. The preset potentiometer above the terminal strip allows the output voltage to be set exactly.

The next step is to prepare the rotary table. This unit is a Vertex HV6, and I've posted pictures of it on this blog before. It will need to be finessed somewhat before the motor can be fitted. I will also have to make the motor mounting hardware.

Once assembled the new improved rotary table will greatly facilitate the machining of the engine components.


Posted by British Reaction Research at 21:46