Last week I finally got around to testing the pottery kiln that I intend to use as a heat treatment oven.

The tube bundle thrust chamber will be a weldment composed of 6082 and 6063 elements. In order to solution treat or artificially age this I have to raise it to a temperature of 525 degrees Celsius +/- 10 degrees and hold that for a specified time.

The kiln is fitted with what looks like a relatively sophisticated temperature control system based around a thermocouple. I doubted whether this would be very accurate given it's intended use for firing pots. The temperature control dial is calibrated in 20 degree increments, so I wanted to find out just where exactly 525 degrees would lie.

The top and side of the kiln are fitted with inspection holes that are plugged up with ceramic bungs. So I draped one of my K type thermocouples into the top hole and carefully replaced the bung so as to trap the cable in place. In this way the thermocouple was suspended roughly in the centre of the kiln's heated space.

I had the thermocouple connected up to one of the amplifier units that I have shown previously. The output from this was fed to one of the ADC inputs of an Arduino Uno. The Uno was programmed using LINX toolkit for LabVIEW. The LabVIEW application that was built for the Uno was running on the laptop to which the Uno was connected by USB link.

The workshop roller door was fully opened to guard against any build up of fumes and a fire extinguisher was placed close at hand. Having set the temperature dial to what I reasonably hoped would give 525 degrees, I plugged the beast in and fired it up.

A satisfyingly loud hum emanated from the kiln and the temperature began to climb almost immediately. At around 200 degrees smoke started to escape from the lid of the unit, which at this point was slightly ajar. I grabbed the extinguisher in trepidation but I needn't have worried; clearly just grease or some other residue burning off after months of disuse.

Satisfied that all was well I shut the lid properly and snapped closed the toggle fastener to make a tight seal between the lid and the main case of the kiln. The temperature was still increasing steadily and the rate of increase had gone up with the proper closing and sealing of the lid.

After 25 minutes of running the 450 degree mark was breached and after 35 minutes a temperature of 520 degrees was attained. This finally settled down at 530 degrees and stayed there, give or take a degree either way.

I didn't think this was too bad at all, what with my initial misgivings about the accuracy of the control system and that the dial had been set quite roughly.

Below is a screen shot from the LabVIEW temperature display showing that 531 degrees Celsius had been attained. 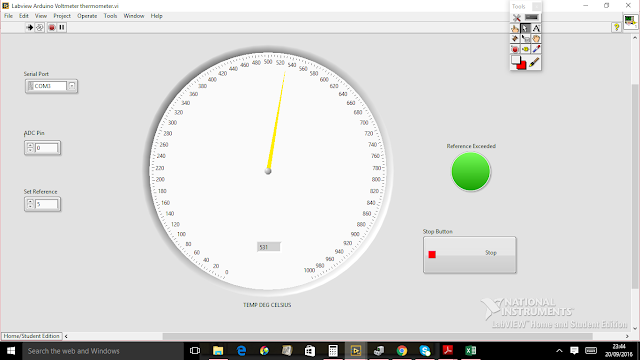 More details to come on the tube bundle design and tube bending arrangements.

Posted by British Reaction Research at 10:43