Detailed results from the shear coaxial injector trials are now ready and will be published in due course. That said I have been making progress in the workshop based on the conclusions of the shear tests. I will report on that now.

The salient points of the shear tests were as follows:-


These observations make it fairly clear that swirl on the liquid phase appears to be advantageous in terms of droplet size reduction and spray stabilisation. It would seem obvious that a good method to reduce droplet size is to use the pressure of the liquid to effect primary atomisation prior to the stream being hit by the gas. The mechanism of stabilisation is less clear.

Swirl atomisers work by using the pressure of the fluid to impart tangential velocity to the flow. The fluid then exits the atomiser in a swirling, air cored, thin walled cone. The following images (Rocco, Goncalves and Iha) show the classical swirl atomiser disintegration mechanism. The image with three shadowgraphs of a swirling cone shows the swirl angle increasing with inlet pressure and the break up length decreasing (which corresponds to a thinning of the swirling sheet). This is due to the greater tangential velocity produced by the higher pressure. The conical sheet exhibits longitudinal and lateral waves on it's surface. These are in fact Kelvin-Helmholtz waves. The second image (line drawing) shows that droplet formation proceeds from the break off of toroidal ligaments whose thickness is of the order of the film thickness and whose length corresponds to the wavelength of the surface waves on the sheet.

If this thinned swirling sheet is sheared by a co-flowing gas, then it seems logical that smaller droplets should be produced than just with shearing alone.  In a rocket motor where the oxidiser is a gas, encapsulating the oxidiser with the fuel prevents any unmixed oxidiser reaching the chamber walls and reacting with them. Since the oxidiser in the Thunderchild system is the gas, a gas centred injector is seen to be desirable.

Such a gas centred swirl coaxial injector could be characterised as a straight post for the gas, surrounded by the liquid swirl inducer. Intuitively it would seem to be advantageous to allow the swirling flow to develop fully before subjecting it to the gas stream. The gas would shear the thin swirling sheet before it had exited the atomiser body, meaning primary atomisation would take place inside the injector cup.

The swirl inducer is the key component in this system. Swirl can be produced either by tangential drillings or a helical element. I looked at methods of drilling tangential holes, but ruled this out as being too hit and miss. I had done some preliminary experiments with swirl in 2011. The swirl inducers were simply made by cutting sections from double start wood screws. This was the method of producing tangential flow in the swirl portions of the shear coaxial tests. A more reproducible means would be to screw cut multiple start helical swirl inducers. That way a number of inducers could be manufactured to fit into a single common body. The dimensions of the  helical passages would also conform to a nominal standard.

As I already had the tooling to cut metric trapezoidal threads, I decided this was the way to go in terms of producing serviceable elements. The last post shows a swirler made in this way. I obtained the carbide inserts from Associated Production Tooling in Glasgow:- www.shop-apt.co.uk

As previously mentioned, the metric trapezoidal thread is similar to acme, but with a thread angle of 30 degrees instead of 29 degrees.The image below shows the thread profile. The full specification is given in BS 5346 and more information can be found here:- www.roymech.co.uk/Useful_Tables/Screws/Trapezoidal.html

After studying swirl atomiser theory I decided to try to simplify the flow calculation by removing the effect of discharge coefficient. This could be achieved by sizing the outlet orifice much larger than would be required to deliver the flow rate from the trapezoidal helical passages.

This should make it possible to use standard pipe flow equations to calculate the flow through the helical passages, the dimensions of which could be found from the relevant standard. The image below shows the formula for the area of a trapezium:-

The wetted perimeter in this instance is the sum of all four sides. The length of the angled sides was calculated using trigonometric relations.

The first swirler manufactured was shown in the previous post. This was a two start 2mm nominal pitch metric trapezoidal thread on an 8mm diameter brass bar. I decided to scale this up slightly for the test units and ultimately the prototype injector. I went with 12mm bar and 3mm nominal pitch, again with a two start thread. I reasoned that the 12mm diameter inducer would be easier to get a gas post through. I also had hopes that the wider swirler would lead to a thinner liquid film, and hence smaller droplets.

The actual pitch of the thread was increased to 6mm to allow a double start. The machining method was as described in the previous post. A simple body was made to carry the swirler. This was of 25.4mm diameter BS230M07 steel. An 8mm long, 7.5mm diameter outlet orifice was drilled. This has a conical lead in from the swirl inducer. The inducer is a transition fit in the body and a 1/4 inch BSPT fitting introduces the test liquid, water in this case. Here is a high speed flash photograph of the assembled device on test:- 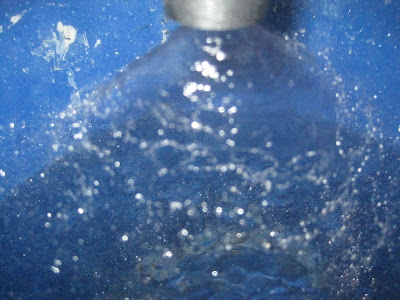 A well defined cone can be seen, as can toroidal ligaments tearing off and forming droplets. The cone angle is approximately 110 degrees.

The better images were taken from above the cone, also at high speed and with flash:- 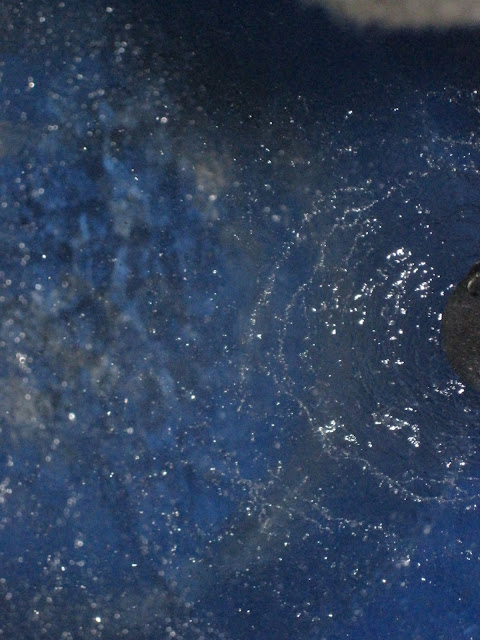 It is instructive to compare this image with the shadowgraphs taken from Rocco, Goncalves and Iha. The lateral and longitudinal waves can be seen on the surface of the cone. The break away and subsequent disintegration into droplets of the toroidal ligaments is prominently displayed.

Here is the same photograph with some droplet sizes measured using the same software as in the shear coaxial tests:- 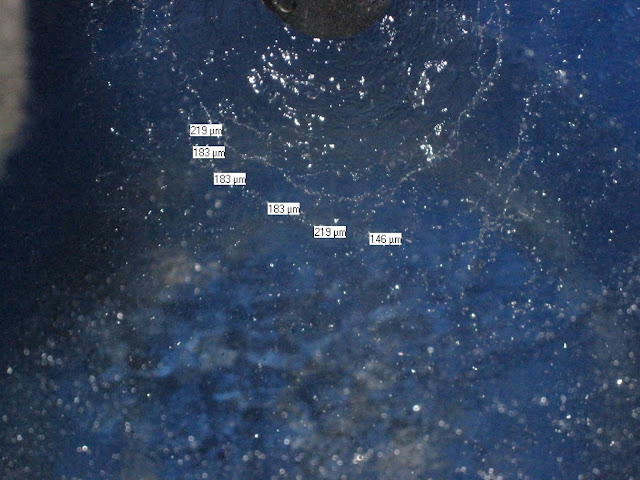 Droplet sizing is seen here over one of the toroidal ligaments. This was just a rough attempt to get some idea of the sizes produced. It can be seen that the smallest resolvable drop sizes seem to be a definite improvement on those in the shear coaxial tests.

From the droplet sizes it would appear that the film thickness is in the region of 180 - 220 microns.

The flow rate for this two start swirler was calculated at 0.047 kg/sec, using the equivalent diameter as defined in (1) above. The actual flow rate measured by timed discharge was 0.05 kg/sec. Allowing for timing and measurement errors this seems like a reasonable level of agreement. It looks as though the assumptions made regarding flow calculation were plausible.

Finally, here is a triple start swirler that has been machined on a 12mm brass bar. This is also 3mm nominal pitch. For a three start thread, 3mm metric trapezoidal would need a pitch of 9mm. The Harrison M250 can cut a maximum pitch of 8mm. Hence the compound had to be advanced by 2.6mm per start, as opposed to 3mm. This is of little importance in this application. In the second photograph, the three starts have been marked in black, green and red ink to make them more visible. The image of Her Majesty the Queen gives the scale:- 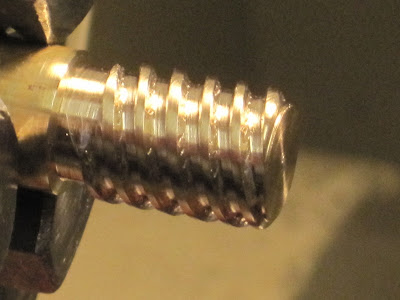 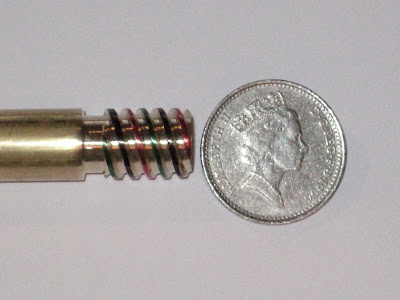 The next stage will be to construct a prototype gas centred swirl coaxial injector for testing. Keep watching this space.

Posted by British Reaction Research at 01:51