I am still working on the results of the shear coaxial injector tests. In the meantime, here is what I have been up to in the workshop.

I have gone a little further down the road to producing a swirl prototype by machining some swirl inducers.

The photograph shows a swirl inducer that has just been machined. The insert tool can also be seen. The thread is of 2mm pitch, meaning that the Harrison was set up to cut a 4mm pitch for the first start, and then the compound was advanced by 2mm to put the second start in between the first.

The liquid will be swirled through the annulus, thereby creating a thin film which will be atomised very completely by the high speed gas flow through the core. High swirl and high momentum flux ratio are the keys to this system. 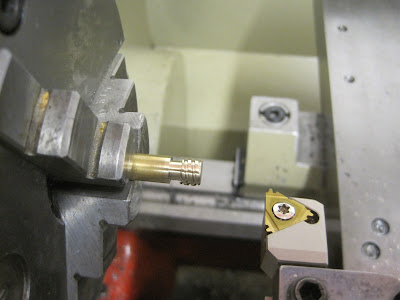 Posted by British Reaction Research at 17:59