I am still trying to get my head around the dynamics of the blog format; I am much more accustomed to writing in a chronological, linear fashion, where causal events follow on in a natural progression. You see, things have been going on in the workshop and I want to tell you about that. However, I feel that I should be enlightening you on the design of the engine...I also have to take into account the fact that all you've seen so far are pictures of tools. Now, though there is a certain voyeuristic pleasure in this, I have to admit that if I came to a Rocket Engine blog, I'd want to see pictures of shiny rocket engine components...You can see my dilemma.

Well, anyway, its my blog so I can write it how I like. So in this post you can find out about some welding and machining trials I've been doing. And see a few shiny rocket engine components.

I have to say, its been a pleasure to be in the workshop over the past few weeks. The snow came in mid November last year and stayed, with little reprieve, until after Christmas. It wasn't much fun in there when it was -10 Celsius outside, let me tell you, even with the heating on. Fortunately Spring has now resolutely sprung. The new warmth is most welcome!

I mentioned I had a new welder in the last post. I realised quite early on that welding was going to be a prerequisite for the construction of a safe and viable rocket engine. The inclusion of welding in the armoury of fabrication techniques solved many of the contentious design problems at a stroke. TIG welding was an obvious choice given my need to make clean, precise welds on relatively small components. I also went on a welding course to gain skills and knowledge. I did my course with Mark Ellis at Varis Training in Morayshire:- http://www.varis-training.co.uk/ The course was money well spent, what Mark doesn't know about welding would fit in a thimble.

Prior to Christmas I manufactured all the parts for the rocket engine combustion chamber. Here is a picture of the trial-assembled unit:- 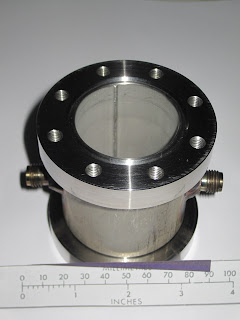 Everyone loves a picture of something next to a rule, don't they? Metric at the top, Imperial at the bottom. I will go into the detailed design of the chamber in a later post. Suffice it to say it has an L* of 1.5 metres (60 inches) and is double walled, the external wall forming the cooling jacket. I've decided to go for a split design, in which the chamber, injector and nozzle are separate flanged units that can be bolted together. Sealing will be by gaskets manufactured from ceramic paper.

The chamber is entirely made from 304 stainless steel. The flanges are machined from round bar and the inner and outer tubes are lengths of nominal bore hydraulic pipe. The inner surface of the inner tube is of course the hot gas side. The dump cooling water flows in the gap formed by the inner tube outer surface and outer tube inner surface. This gap is 3.2 mm (0.125 inch) and is maintained by a lip machined on the inner face of each flange. Eight blind holes are tapped M8 to a depth of ~12mm (~0.5 inch) for fixing purposes.

Here is another view:- 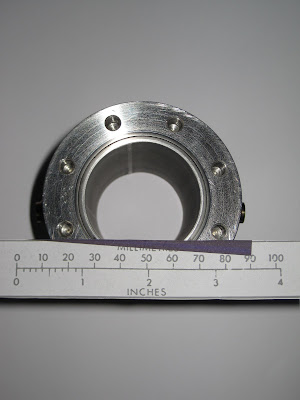 As I said I'll go into the detailed design with all the juicy equations in a later post. All you need to know now is that I have to weld this unit together. Ideally with negligible distortion. The dimensions are slightly oversize to allow for post weld machining.

The requirement for pulse TIG welding should be fairly apparent from the pictures. The outer tube has to be fillet welded to the flanges - fairly close to an edge in each case, and at the back of the tapped holes. Similarly the inner tubes need to be welded to the top faces of the flanges - again right on the edge of the tube and close to the mounting holes.

Pulse TIG works by using a Pulse Width Modulated welding current. When the pulse is high a large current flows, creating the weld pool. Then when the pulse is low, the lower current "freezes" the pool. The effect of doing this at a frequency of around 25Hz is to effectively make the pool stay where you put it. The tendency to melt the edge off a workpiece is greatly reduced. The second benefit of pulse is to effectively "focus" the arc; it becomes tighter and more precise.The waveform results in an average current that should be something like what you'd be using if you weren't in pulse mode. So you can see that pulse TIG seems to be the solution for welding components like my chamber. That is one of the main reasons I invested in the new welder.

I decided to do some fabrication trials to find the optimum pulse setting for my application. I should also mention that I needed to weld the coolant inlet and outlet fittings onto the cooling jacket (outer tube). I had initially intended to make some stainless bosses, tapped to 1/4 inch BSP, and weld these on. I decided on the simpler option of just welding modified swagelok fittings directly to the jacket. You can see the end result in the first photograph. I didn't use pulse TIG for this, though in retrospect I wish I had. That said the result is tidy enough and fit for purpose. Here it is:- 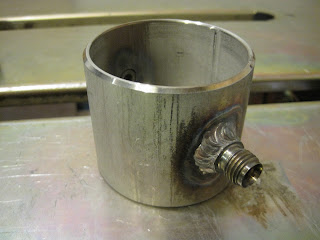 I didn't need to bevel the edges of the tube for the fillet weld. I made a mistake when machining the part but I decided to use it anyway as it won't make much difference to the weld.

I was quite concerned about doing the fillet welds between the flanges and outer tube. As you can imagine it took a substantial amount of painstaking work to make the chamber components. I didn't want to ruin it by carelessly ploughing on with the welding. So I decided to trial the pulse parameters on some test pieces. This would not only prove the welder but also hone my torch technique. I cut some sections of 304 round bar and nominal bore pipe to simulate the flange and tube arrangement. The picture below shows the weld I managed to achieve after three different attempts at altering current and pulse settings, as well as developing a good workpiece and torch position. 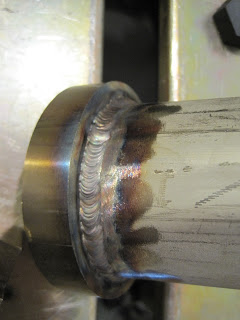 I found the best way to achieve a good weld was to tack at about eight equidistant points and then join these up with short runs of bead. This minimised the amount of torch manipulation required. Here is the test assembly as tacked:- 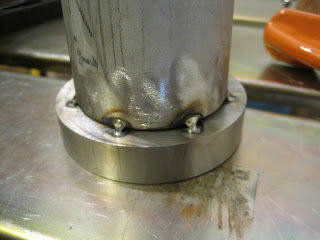 After these fabrication experiments I feel more confident about joining the combustion chamber. Admittedly, the flanges in the chamber have less metal in them, due to the central hole. I will most likely need to reduce the current slightly to account for this smaller heatsink.

So much for the welding. You will have heard me talking about using BSP fittings and threads in the design. I decided early on to try to avoid any sort of elastomeric sealing arrangement as far as possible. I felt this would both simplify construction (no "O" ring grooves to machine) and promote safety and reliability. BSP threaded components are ideal for this as they seal by virtue of interference on a tapered thread.

I made a mild steel test version of my injector design last summer. It was machined from BS230MO7 steel. This material is known for its machinability. 304 stainless steel on the other hand, is not. The design of the injector requires the tapping of two holes, one to 3/8 inch BSP and one 1/4 inch BSP. This was fairly straightforward in the free cutting steel.

I decided to trial cut some BSP threads in 304 stainless. I used a piece of 25mm 304 round bar for the tests. As expected, it was much harder to cut the threads using my HSS taps. A great deal of torque was required. I normally tap by hand in the lathe, but in this instance I had to tap under power to achieve the torque required. The thread produced was quite serviceable, but I could almost feel the strain that the taps were under. I will post some pictures of these tests in the next few days.

My findings justified obtaining some new tooling. I got some "Blue Ring" spiral flute machine taps, in 1/4 inch and 3/8 inch BSP. I used Drill Service Horley, in Horley, Surrey:- http://www.drill-service.co.uk/

I've yet to trial these but you'll get to know about it when I do.

Posted by British Reaction Research at 00:29