As a material for thrust chamber construction, aluminium is superior to stainless steel in a number of important regards.

Steel is typically 2.5 times the density of aluminium, which has obvious impact on power to weight ratio. Aluminium has 92% higher thermal conductivity compared to stainless steel, easing cooling circuit design. Although aluminium exhibits lower strength at elevated temperatures, this tends to be offset by the material’s excellent heat transfer characteristics. Aluminium is easier to machine and less expensive, enabling time and cost savings to be realised.

The strongest of the commercially available 6000 series alloys is 6082 T6, with a UTS in the region of 300MPa. It can be had in all the major sections, as well as plate and sheet. That said, the smallest tube diameters tend to be on the large side for the projected design application. For suitable tube it is necessary to use 6063 T6, which is ideal for these sizes as it is easier to extrude. This has a UTS around the 250MPa mark.
The graph below shows the behaviour of various alloys, including 6082, at elevated temperatures (European Aluminium Association). 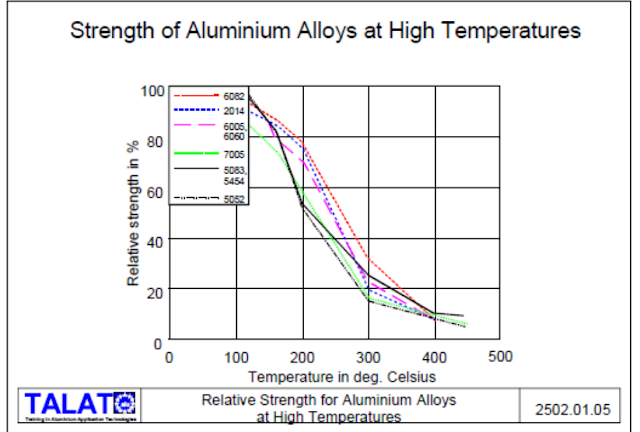 As shown, 6082 maintains 90% of it’s relative strength at 150 degrees Celsius. The other 6000 series alloys follow this relationship closely. The graph below shows the effect of exposure to high temperatures on the room temperature tensile strength of 6061 T6 (MIL HDBK 5H). 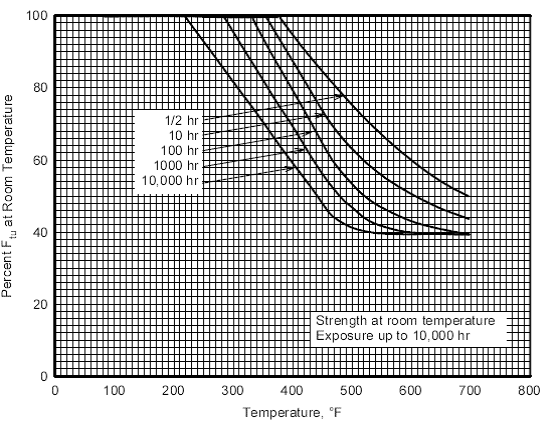 At 220 degrees Fahrenheit (approximately 100 degrees Celsius) the tensile strength of 6061 T6 shows no degradation, even after 10,000 hours exposure. This should be familiar territory to anyone with an aluminium saucepan.

The sweet spot temperature wise for the 6000 series alloys can be seen to be 100 – 120 degrees Celsius. Providing the metal starts out in the T6 condition it should stay that way and have sufficient strength to withstand the combustion forces.

The high thermal conductivity and high emissivity of aluminium makes Twg figures in this region feasible, given the current fuel/coolant design flow rate. Basing the chamber wall thickness on 90% of the UTS of 6063 T6 gives a factor of safety of 1.3 at twice the design chamber pressure.

The main drawback to the use of aluminium in the present scheme is the loss of temper brought about by welding. The properties of the section in the weld are lowered to the T0 condition. This is a loss of tensile strength of some 80%.

However, aluminium weldments may be brought back up to the T6 condition by post weld heat treatment. This typically takes the form of solution treatment followed by artificial ageing.

It can be seen that the advantages accrued from the use of aluminium as a material for rocket motor construction make research into the heat treatment problem worthwhile.

The table below is taken from a Welding Research Supplement by the UK Welding Institute from 1983. The subject of the research was the effect of post weld heat treatment on 6082 T6 and 5083 plates and sheets. The plates were cut and then welded back together, with test pieces being taken from across the weld plane. A typical test piece is shown below the results table. The 6082 T6 sheet was TIG welded with 4043 and 5556A rod to investigate the effects of the different fillers. 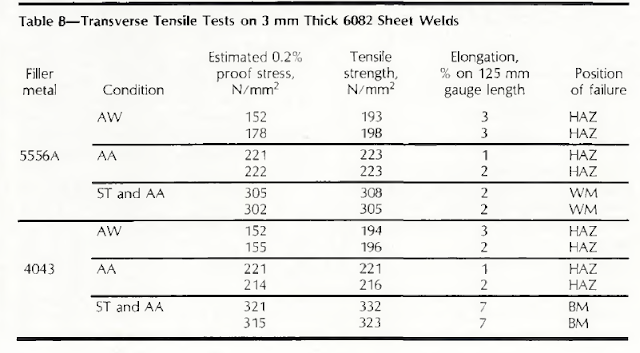 And the test piece dimensions:- 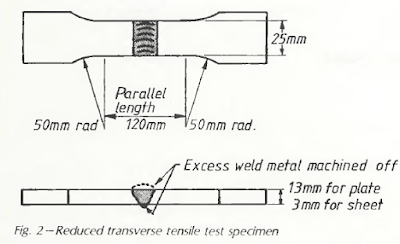 The table shows that in the as welded condition (AW), the 6082 plate joined with 4043 filler showed markedly lower 0.2% proof stress and tensile strength. After artificial ageing (AA) the figures are improved, but still significantly lower than the T6 condition. Both these welds failed in the heat affected zone (HAZ) and show limited elongation.

By contrast, the 0.2% proof stress and tensile strength of the solution treated and artificially aged (ST & AA) sample shows values much closer to the un-welded T6 condition. The elongation has also improved, and the test piece failed in the base metal (BM).

The table portion below comes from the UK Aluminium Federation's publication "Strength of Aluminium Alloys". This shows the temperatures in degrees celsius, hold times in hours and quenching medium required for solution treatment and artificial ageing of both 6082 and 6063 alloys.

Commercially available heat treatment ovens are prohibitively expensive. That said, a pottery kiln is capable of achieving the required temperatures. I have managed to get hold of a second hand kiln from ebay. The unit is able to reach a maximum temperature of 1200 degrees celsius. A thermocouple within the heated space enables closed loop control of the temperature. The internal volume is 300mm^3. Here is a photograph of the kiln:- 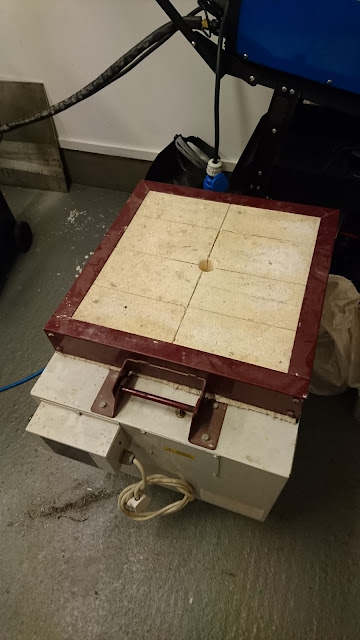 I intend to produce a number of test specimens similar to the one shown above. These will be in 6082 T6 plate. The test specimens will be of three types, welded with no heat treatment, welded and heat treated in the kiln, and finally a solid section of plate with no weld as a control.

In order to subject these pieces to a tensile force I have designed and am in the process of constructing a rudimentary tensile testing rig. The next three photographs show the rig so far:- 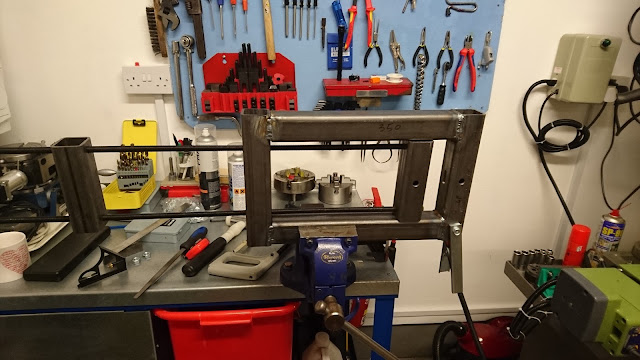 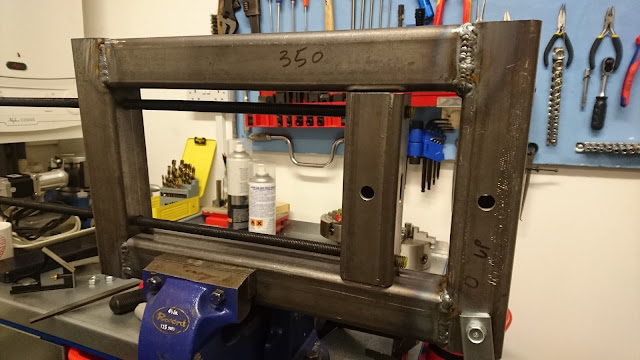 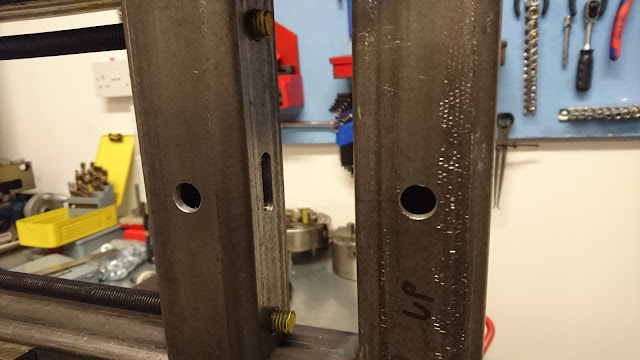 Force will be inferred from a pressure gauge and extension from a DTI. I could acquire both values by electronic means but I do not want the unit to become a project in it's own right. Based on the ram piston diameter, a pressure of 400 bar (6000 psi) should produce a force of 29kN. This will be enough to break a test piece with a gauge area of 90mm^2.

I'm hoping that these tests will show that solution treatment and artificial ageing using the kiln will work. This will be an important step forward in the production of an aluminium tube bundle chamber.
Posted by British Reaction Research at 23:35