The fuel injector of a rocket engine is without doubt the single most important component in the entire system. This is because it exercises influence over all of the closely coupled key performance arbiters. These are:-

If this were not enough, the unit also has to endure the aggressive, high temperature environment of the combustion chamber whilst conforming to a specified form factor.
Over the years injector design has combined approaches of both meticulous research and "try it and see what happens". I have travelled a similar road. Fortunately today there is a vast literature on atomisation, mixing and sprays, both rocket specific and general. Hence my experimental efforts have been guided at each stage by reference to published works.
Injectors for rocket engines fall into two main categories:-
These two types are further broken down into a number of distinct subsets.
An important subset of the Impinging Stream type is the so called Shower Head injector; this may be regarded as an impinging stream injector in which the impingement angle is zero. Impinging stream types are further subdivided by impingement component and pattern. Types include fuel on fuel, fuel on oxidiser, oxidiser on oxidiser and combinations of these. Patterns used are many and various, including doublet, triplet, pentad, and numerous combinations of these. The main mechanism of stream break up and atomisation in the impinging stream type is momentum exchange.﻿ Impinging stream types are primarily used in systems where both fuel and oxidiser are liquids.
Coaxial injectors are the chief choice when one of the propellants is in a gaseous state. They are split into two main groups, shear and swirl. In the shear type, a low velocity central liquid flow is stripped and atomised by a higher velocity annular gas flow. The main mechanism of atomisation in this type is induced Kelvin-Helmholtz instability. The most important performance controlling variable in the shear coaxial unit is the gas/liquid relative velocity. Surface tension of the liquid resists the deforming force of the gas momentum, hence high gas/liquid Reynolds Numbers are common in efficient shear coaxial injectors. Shear coaxial injectors are almost always liquid centred.
The swirl coaxial injector imparts a tangential velocity to either the gas or liquid flow, and in some cases to both. They may be liquid or gas centred. Centrifugal force due to tangential velocity causes liquid ejected from the injector to form a cone shaped, thin sheet spray. Under the influence of the centrifugal force ligamentation and droplet formation rapidly occur in the thin swirling sheet. The key formation mechanism here is Rayleigh Instability, with the centrifugal force standing in for gravity. These droplets are then further broken down by the gas flow induced Kelvin-Helmholtz type mechanism of the shear injector. In the case where both gas and liquid are swirled, momentum exchange also plays a part in the spray formation.
High gas to liquid Reynolds numbers are again a feature of this type of unit. Swirl atomisation is governed by the efficiency with which the potential energy of the flowing stream is converted to a tangential velocity. Key to this is the minimisation of friction in the flow path.
A quick survey of amateur liquid rocket engines on the internet showed the proliferation of the impinging type injector. My view was that the multiplicity of small holes needed would be difficult to drill accurately at the angles required, as well as being difficult to deburr effectively. This would lead to stream misimpingement and hydraulic flip as well as many broken drills. The impinging stream type injector would also be more difficult to manifold.
As the present project is using a gaseous oxidiser, I decided to go with a Coaxial injector design. I felt that this would be easier to manufacture and be more amenable to performance enhancing modifications. It would also be a unique feature of the Thunderchild Project.
Here is a photograph of an early mock up to illustrate the coaxial principle:- 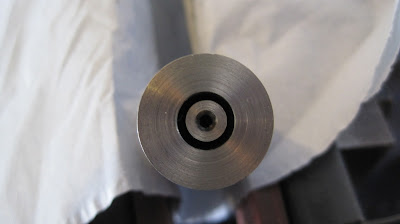 Next I'll look at how this principle was developed.
﻿
Posted by British Reaction Research at 12:04